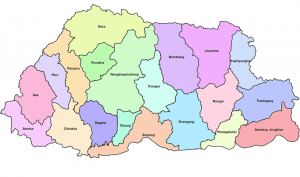 As depicted in the map, Bhutan is divided into 20 districts. For tourist visiting Bhutan via air have only one entrance; Paro. For those entering via road has three main entrances; Phuntsholing under Chhukha district (Southwest), Gelephu under Sarpang district (Southern central) and Samdrupjongkhar (Southeast).

Annually Bhutan receives around sixty thousands (60000) of international tourist and over hundred thousands of regional tourist (Indian, Bangladeshis & Maldivian). Amongst this, around 75% visits only 3 western districts of Bhutan; Paro, Thimphu and Punakha.

The table below shows the distances between few of the important tourist visiting places in Bhutan and some of the nearest Indian airports to Bhutan.

Note: Due to nature of road and terrain, the average speed one can drive in Bhutan is 35 to 50 km per hour.