In contrast to rest of the trek routes in Bhutan, the altitude only ranges between 1000 m to 2000 m hence making it a best trek route for winter season (December to February). Another best time to trek on this trails are spring (March – May) and autumn seasons (September – November). 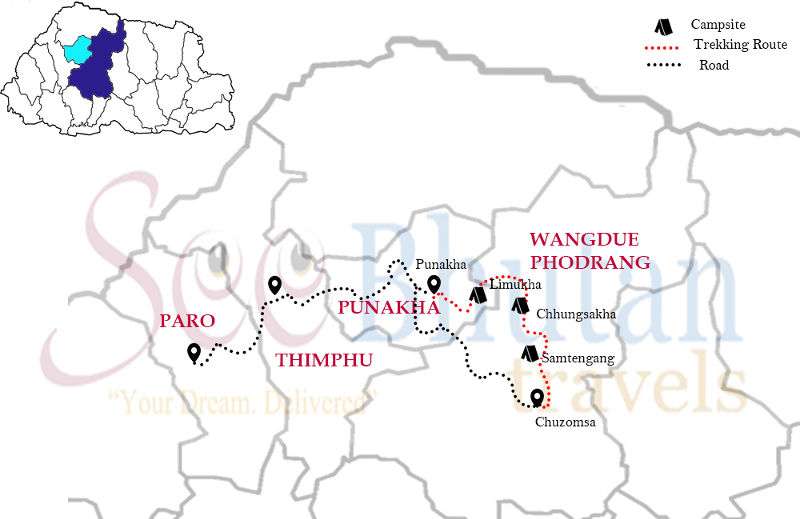 Welcome to Bhutan. Your guide and driver will be waiting for you at Paro International airport. The drive from Paro to Thimphu will take around one hour. After reaching Thimphu, check into your hotel, enjoy your lunch and set out for exploring Thimphu city and places around it. Towards evening visit to National Memorial Chorten, mingle with elderly people, circumambulate the stupa and get blessed.

National Memorial Chorten: Located in the heart of Thimphu city, it was built in 1974 by Her Majesty the Queen Mother Ashi Phuntsho Choden in memory of her son, Third King Jigme Dorji Wangchuck. The three-storey choeten houses several relics such as Phurba Lhatshog, Kagay, Khrowo Nampur Gyalwa, Guru Tshengye, and Khenlop Chesum. The choeten is today the spiritual nerve centre of the city.

In the morning visit to Buddha statue located at Kuenselphodrang.

From here we will drive towards Punakha via Dochula Pass. After descending down from Dochula pass for about an hour, we will reach Khemae Lhakhang. Pay visit to the Lhakhang and head further up towards Punakha. Check into your hotel and towards evening visit Punakha Dzong.

Dochula Pass: Located 23 km east of Thimphu city, Dochula pass at the height of 3100 m above sea level is Bhutan’s most decorated and beautiful pass. On this pass is 108 stupas called Druk Wangyal Chortens, built by Queen mother Ashi Dorji Wangmo Wangchuck. There is also a temple called Druk Wangyal Lhakhang built in the honour of fourth king of Bhutan, Jigme Singye Wangchuck for his service to his subjects. The front yard of this temple is a venue for Druk Wangyal festival which is conducted annually in the month of December. On the backdrop of this pass is the stunning view of snow capped mountain ranges and amongst which is Bhutan’s tallest mountain Mt. Gangkar Puensum(7570m).

Punakha Dzong: The dzong is situated on a stretch of a land where two rivers – Phochu and Mochu – meet. The dzong was built by Zhabdrung Ngawang Namgyal in 1937 and named it Pungthang Dewa Chenpai Phodrang, the palace of great bliss. Later it became the final retreat palace for him. The first monarch, King Ugyen Wangchuck, was crowned there and it served as the capital of the country until 1955. Today it serves as the winter residence of the Central Monastic Body. The sacred relic Rangjung Kharsapani is also kept in the Machen Temple inside the Dzong.

The trek begins from Punakha Dzong. We will cross Bhutan’s longest suspension bridge over Pho Chhu River and ascend towards our next stop over, Limukha via Shengana village.

Today after trekking for around 5 hours, we will spend our night at campsite located next to Chhungsakha, a small village of around 10 households.

Today at the end of the day, we will camp near a small lake at Samtengang village.

After trekking for about 5 hours from Samtengang campsite, we will finally reach at Chuzomsa, our extraction point. From here we will drive to Wangduephodrang where we will spend our night.

Overnight: At hotel in Wangduephodrang.

Today after breakfast, we will drive back to Paro via Dochula pass. After reaching Paro, we will visit to following places:

Paro Ta Dzong (national museum): Located on a spur above Rinpung Dzong, five and a half kilometres’ drive from Tshongdu town, the dzong was built in the mid-17th century as a watchtower overlooking Rinpung Dzong by Lanyongpa Tenzin Drukdra and Chogyal Migyur Tenpa. The circular dzong houses the National Museum of Bhutan.

Kichu Lhakhang: Located about 10 minutes’ drive from Paro town, the temple is one of the two among 108 temples built by Tibetan King Songtsen Gampo in the 7th century to subdue a demon that lay supine across Tibet and Bhutan. The temple contains sacred relics dating back to the 7th century like a statue of Lord Buddha and four statues of Chagtong Chentong. It also contains the statues of Guru Nangsi Zilnon, Dolma Kukuli (a manifestation of Tara), Zhabdrung, the bone relic of his Holiness Dilgo Khyentse Rinpoche.

After your breakfast, guide and driver will see you off at Paro international airport for your onward destination.