We will follow the trail used in ancient times by people of Haa valley to visit Paro. It is believed that these trails are mostly used during rice cultivation as farmers from Haa travels to Paro as laborers and in return they are paid with rice. Located on higher altitude and being colder region, rice does not grow in Haa.

There are few variants on this trek. Following the ancient trail used by farmers, it can be completed within two days and Drugyal Dzong being the end point but we will follow the Chelela trail which will take one extra day and Chelela pass being the end point. 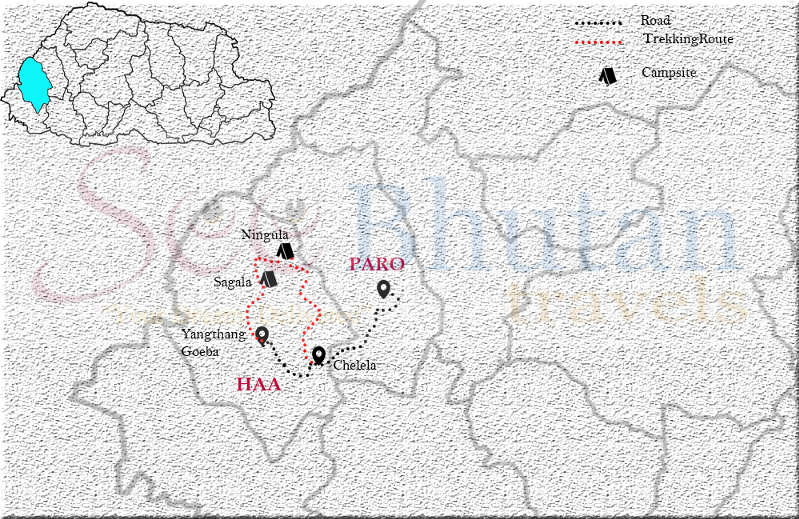 Upon arrival at the Paro international airport, you will be received by a representative (guide and driver) of our company and escort to a local restaurant for the lunch. After lunch, we will drive towards Haa via Chelela pass for about hour and half. Only in the year 2002, Haa valley was opened to the foreign tourist for the first time. There are lots of famous sites like Lhakhang karpo (white Temple), Lhakhang Nagpo (Black Temple) and Haa Wangchuk Lo Dzong. If time permits we will visit few of those ancient sites.

We begin our trek through an unpaved motor road for about an hour before finally climbing up the footpath trail and amidst the yak herder’s camp. At the end of herders camp is a junction where we will take the left. Right trail will lead towards the border of China. After ascending for a while from this juncture is our campsite for the night, located just below Sagala (3150 m). Enjoy a hot cup of tea prepared by your crew members and embrace yourself with a stunning view of Himalayan landscape.

In the morning we begin our journey upward towards Sagala pass (3550 m) for about half an hour. On a day with clear weather, one can have a stunning view of Mt. Jumolhari (7315 m) and Jitchu Drake (6989 m).

After crossing the pass, we will trek along the right side of the ridge, through rhododendron and meadows, finally reaching on top of a ridge at 4100 meters. The entire Haa valley can be seen from this point. The rest of the journey again involves occasional ascents and descents through forests of Hemlock and Juniper until we reach Nyingula, our campsite for the night at an elevation of 3850 meters.

As you trek after breakfast, you will start descending for a few minutes, before following the ridge which traverses through meadows of yak herder’s camp. At the end of the meadow, the ascend towards Kung Karpo begins through tall rhododendron trees and meadows with stone cairns. It would take about 2 hours. A spectacular view of Haa valley is sighted as you climb up through these stone cairns and reach a pass before Kung Karpo. The next highlight is Kung Karpo (Sky Burial at 4350 meters). At Kung Karpo, one can scale and reach the top of the mountain to see the Sky Burial. From Kung Karpo begins a trail that ascends and descends. All along the route, you will see Paro valley on the left and Haa valley on the right. You can also feast on a view of Kila Goenpa Nunnery. Once you reach the final ridge, your trek is downhill until you reach Chelela pass (3980 meters). It takes about 90 minutes to reach Chelela pass from Kung Karpo. From Chelela pass, you will be driven to Paro.

Your short and memorable tour to Bhutan comes to an end today. After breakfast, your guide and river will see you off at Paro international airport for your onward journey.
See you in future.