This is fairly an easy trek which will best suit for those who are beginner or with less time to spare. These trek routes will lead you through gentle slopes, lush meadows and forest rich in Juniper trees, dwarf bamboos and rhododendrons. Though you can trek all year round on this routes, the best seasons are spring (March, April and may) and autumn (September, October and November). 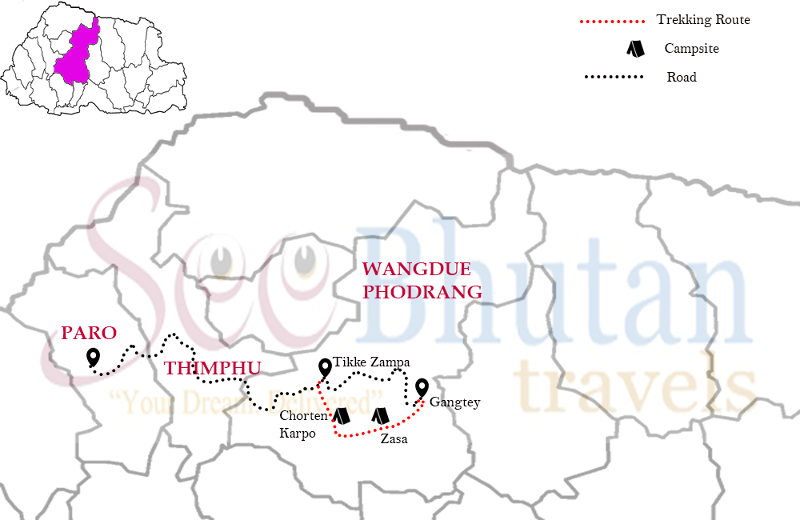 Welcome to Bhutan. Your guide and driver will be waiting for you at Paro International airport. The drive from Paro to Thimphu will take around one hour. After reaching Thimphu, check into your hotel, enjoy your lunch and set out for exploring Thimphu city and places around it. Towards evening visit to National Memorial Chorten, mingle with elderly people, circumambulate the stupa and get blessed.

National Memorial Chorten: Located in the heart of Thimphu city, it was built by in 1974 by Her Majesty the Queen Mother Ashi Phuntsho Choden in memory of her son, Third King Jigme Dorji Wangchuck. The three-storey choeten houses several relics such as Phurba Lhatshog, Kagay, Khrowo Nampur Gyalwa, Guru Tshengye, and Khenlop Chesum. The choeten is today the spiritual nerve centre of the city.

If there is enough time left, we will pay visit to Buddha Statue (Dordenma) at Kuenselphodrang.

Buddha Dordenma: Located at Kuenselphodrang, facing Thimphu valley down bellow is the worlds’ largest and tallest Buddha statue standing at the height of 169 feet (52m). The statue houses one hundred thousand of smaller Buddha statues, the exact replica of the outer Buddha statue. From here one can have a 360 degree view of Thimphu valley.

Today after early breakfast, we will head towards Phobjikha valley. On the way after 30 minutes drive from Thimphu we will stop for a while at Dochula pass.

Dochula Pass: Located 23 km east of Thimphu city, Dochula pass at the height of 3100 m above sea level is Bhutan’s most decorated and beautiful pass. On this pass is 108 stupas called Druk Wangyal Chortens, built by Queen mother Ashi Dorji Wangmo Wangchuck. There is also a temple called Druk Wangyal Lhakhang built in the honour of fourth king of Bhutan, Jigme Singye Wangchuck for his service to his subjects. The front yard of this temple is a venue for Druk Wangyal festival which is conducted annually in the month of December. On the backdrop of this pass is the stunning view of snow capped mountain ranges and amongst which is Bhutan’s tallest mountain Mt. Gangkar Puensum(7570m).

From here, we will drive further eastward to Gangtey, Bhutan’s most beautiful glacial valley. After arriving, we will check into hotel and set out for exploring the valley.

The trek starts from Gangtey. We will cross Tsele la pass (3430m) before reaching our campsite located at Zasa. It takes about 6 to 7 hours to reach Zasa from Gangtey.

After warm breakfast at our campsite, we will head towards Chorten Karpo, crossing Shole la pass (3480 m) and Khotokha village.

After trekking for about 5 hours, we will finally reach Tikke Zampa, our extraction point. From here we will drive towards Wangduephodrang.

Overnight: At hotel in Wangduephodrang.

Today after breakfast, we will drive back to Paro via Dochula pass. After reaching Paro, we will visit to following places:

Paro Ta Dzong (national museum): Located on a spur above Rinpung Dzong, five and a half kilometers’ drive from Tshongdu town, the dzong was built in the mid-17th century as a watchtower overlooking Rinpung Dzong by Lanyongpa Tenzin Drukdra and Chogyal Migyur Tenpa. The circular dzong houses the National Museum of Bhutan.

Kichu Lhakhang: Located about 10 minutes’ drive from Paro town, the temple is one of the two among 108 temples built by Tibetan King Songtsen Gampo in the 7th century to subdue a demon that lay supine across Tibet and Bhutan. The temple contains sacred relics dating back to the 7th century like a statue of Lord Buddha and four statues of Chagtong Chentong. It also contains the statues of Guru Nangsi Zilnon, Dolma Kukuli (a manifestation of Tara), Zhabdrung, the bone relic of his Holiness Dilgo Khyentse Rinpoche.

After your breakfast, guide and driver will see you off at Paro international airport for your onward destination.