Thimphu Tshechu is a 3 day festival held every year in the capital city of Bhutan; Thimphu. The festival starts on 10th day of the 8th month of Bhutanese (Lunar) calendar. During this 3 day festival, varieties of mask and folk dances are put into show by monks, villagers and national art performers.
It is a perfect time for friends and families to get together. All the schools and offices within Thimphu district remains closed during the festival. 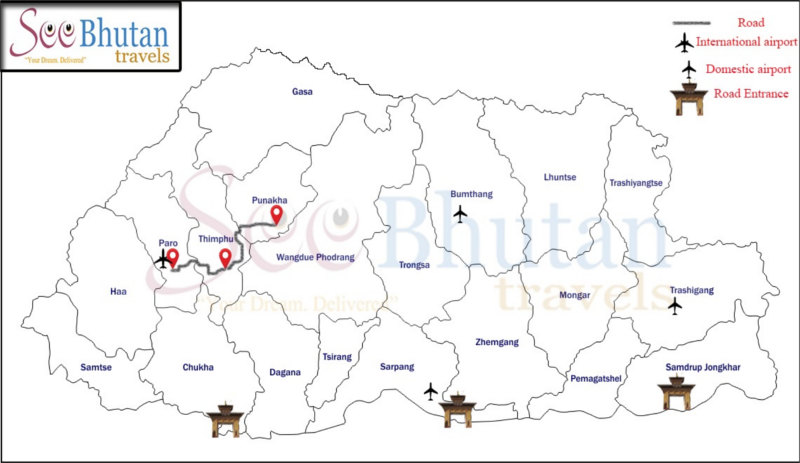 On arrival, our guide and driver will receive you from Paro international airport and transfer to Thimphu (capital). Towards evening pay visit to Memorial Chorten (stupa).

Today is the highlight of our tour. We will dedicate half of the day for witnessing Tshechu and half for visiting to important tourist sites such as Buddha Statue, Textile Museum and Simtokha Dzong.

The principal focus point of Tshechu traditions in Bhutan are mask dances known as cham in local language. These chams are directly related to Buddhist culture and incidents from the life of Guru Rimpoche, a Buddhist saint who visited Bhutan in 8th century from Nepal. While in Bhutan, it is believed that Guru Rimpoche performed mask dances to subdue local spirits and demons that were bringing chaos in the region. He later turned them into as protector of Buddhism.

Since then these traditions has been followed for centuries, becoming one of the core values of Bhutanese culture and tradition. Some of the mask dances (cham) performed at Thimphu tshechu are Dance of heroes (Pacham), Dance of Stags and Hounds (Shawo shakhi), Dance of drums originated from Dramitse village (Dramitse Ngacham), Dance of judgement after dead (Ragsha Mangcham) and the Dance of 8 manifestations of Guru Rimpoche (Guru Tshengye).

Today we will proceed eastward, towards Punakha district. On the way, we will have stopover at Dochula pass (3100m). Located 23 km east of Thimphu city, beautified by hundred and eight (108) stupas, Dochula pass on the clear day can offer an astounding view of snow capped Himalayas. From here the road then descends down till our next stopover at Khemae Lhakhang (monastery).

After arriving Punakha, we will visit to Punakha Dzong and hike to Khamsum Yelley Namgyal Choeten:

Khamsum Yelley Namgyal Choeten: Located in Kabesa Gewog, about 7 km drive from Punakha town; the choeten was built with the sponsorship of her Majesty the Queen Mother Ashi Tshering Yangdon Wangchuck between 1992 and 1999 under the guidance of Dilgo Khyentse Rinpoche and Lam Sonam Zangpo. The three-storey choeten contains the images of Dorji Phurba on the ground floor, Khrowo Khamsum Namgyal on the first floor, and Khrowo Nampur Gyalwa on the second floor.

Today we will travel back to Paro. At Paro, pay visit to Paro Ta Dzong (museum) and Paro Rinpung Dzong.

Paro Ta Dzong: Located on a spur above Rinpung Dzong, five and a half kilometres’ drive from Tshongdu town, the dzong was built in the mid-17th century as a watchtower overlooking Rinpung Dzong by Lanyongpa Tenzin Drukdra and Chogyal Migyur Tenpa. The circular dzong houses the National Museum of Bhutan.

After subdueing, Guru Rimpoche meditated here for 3 years. The monastery was later built in 1694 by 4th Druk Desi (secular head of the country), Gyalse Tenzin Rabgye. Tragically, the monastery was gutted down by fire in the year 1998 but soon it was restored to its former glory.

Your short and memorable tour of Bhutan comes to an end today. After breakfast, your guide and driver will see you off at Paro international airport for your onward destination.