Punakha Drupchen is held annually in the early week of March. The festival showcases the battle scene between Bhutanese warriors and the Tibetan invaders. Zhabdrung Ngawang Namgyal, the founder of Bhutanese state, tricked Tibetan invaders in believing that he had thrown Bhutan’s most sacred relic, Rangjung Kharsapani into the river.
Rangjung Kharsapani emerged from the spinal bone of great Tibetan Buddhist saint Tshangpa Gyarey during his cremation. Zhabdrung brought to Bhutan when he fled Tibet in 1616 after a conflict over the throne to estate of Ralung in Tibet.
Disappointed at what they thought was a silly act, the Tibetan forces withdrew. During this festival, Je Khenpo, the religious head of the country throws oranges representing Rangjung Kharsapani into the river where many brave viewers jump into the icy cold river to grab those blessed oranges. 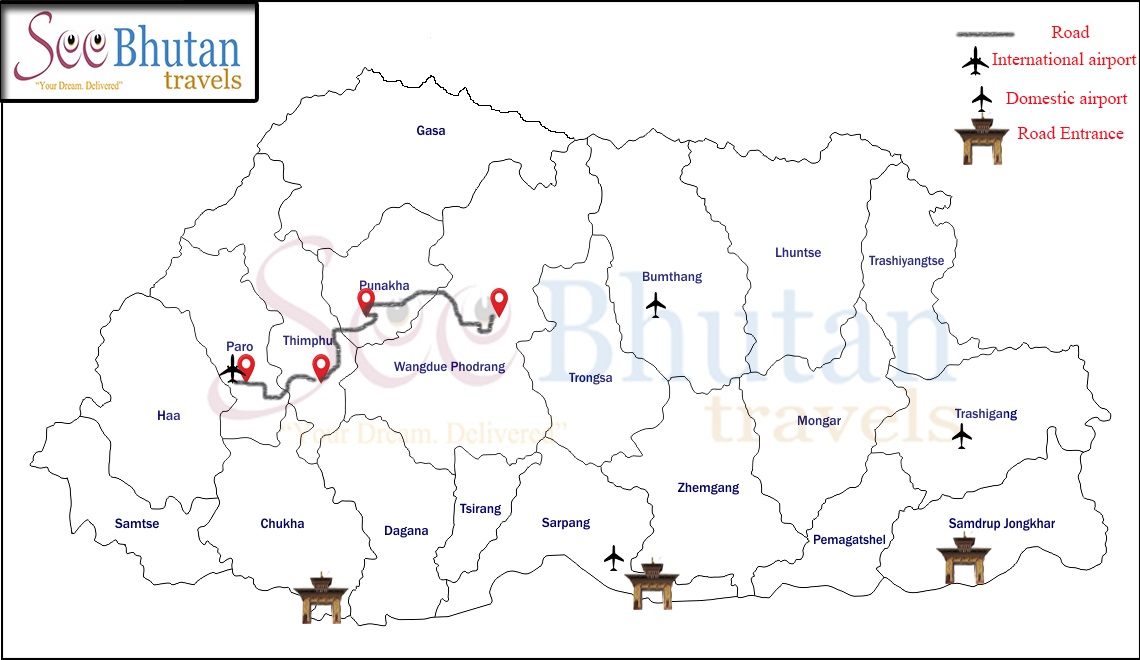 Welcome to Bhutan. Guide and driver from See Bhutan Travels will pick you up from Paro international airport. Enjoy your lunch from Paro and drive towards Thimphu, the capital city of Bhutan. Towards evening pay visit to Memorial Chorten.

After visiting Buddha statue in the morning, we will proceed towards Punakha via Dochula pass. On a clear day, you will have a beautiful view of snow capped mountains of Himalaya. The pass is also decorated with hundred and eight stupa built in the honor of 4th king of Bhutan for his service to the country and his subjects.

After descending down for about an hour, we will reach to a junction where it leads towards Khemae Lhakhang. Pay visit to it and proceed further towards Punakha.

After reaching Punakha, check into your hotel and call it a day.

Today we will visit to Punakha Dzong, the venue of Drupchen. The Dzong is situated on a stretch of a land where two rivers – Phochu and Mochu – meet. The dzong was built by Zhabdrung Ngawang Namgyal in 1937 and named it Pungthang Dewa Chenpai Phodrang, the palace of great bliss. Later it became the final retreat palace for him. The first monarch, King Ugyen Wangchuck, was crowned there and it served as the capital of the country until 1955. Today it serves as the winter residence of the Central Monastic Body. The sacred relic Rangjung Kharsapani is also kept in the Machen Temple inside the dzong.

Along with Drupchen, witness the cultural display of Bhutanese people, mingle and interact with them.

Overnight: At hotel in Punakha.

Gangtey valley which is located 78 km east of Punakha is a beautiful and most scenic glacial valley of Bhutan. This valley serves as roosting spot for Black necked crane, one of the rarest and endangered species of bird which migrates during winter months (November, December, January, February) from Tibetan plateaus and northern region of India.

Once at Gangtey, we will go around for short hikes and towards evening pay visit to Gangtey monastery. We will also visit to nearby villages and mingle with local people.

Today we will head back towards Paro. After arriving, we will visit to Paro Ta Dzong and Paro Rinpung Dzong.

Paro Ta Dzong: Located on a spur above Rinpung Dzong, five and a half kilometers’ drive from Tshongdu town, the dzong was built in the mid-17th century as a watchtower overlooking Rinpung Dzong by Lanyongpa Tenzin Drukdra and Chogyal Migyur Tenpa. The circular dzong houses the National Museum of Bhutan.

Another interesting program of our tour is hiking to Taktsang monastery. Taktsang monastery to Bhutan has become like an Eiffel tower to Paris. The hike on average will take around 6 hours in total. Horse riding facilities are available (own expense) till view point while hiking up towards the monastery.

After subduing, Guru Rimpoche meditated here for 3 years. The monastery was later built in 1694 by 4th Druk Desi (secular head of the country), Gyalse Tenzin Rabgye. Tragically, the monastery was gutted down by fire in the year 1998 but soon it was restored to its former glory.

Your Bhutan tour comes to an end today. After breakfast, your guide and driver will see you off at Paro international airport.