Paro Tshechu is held every year in spring season, towards late March or Early April for 3 days. Highlight of the festival includes unfurling of large Thongdrol (scroll painting) of Guru Rimpoche. The word Thongdrol means liberation at sight. It is believed that a mere sight of Thongdrol will wash away your sins. 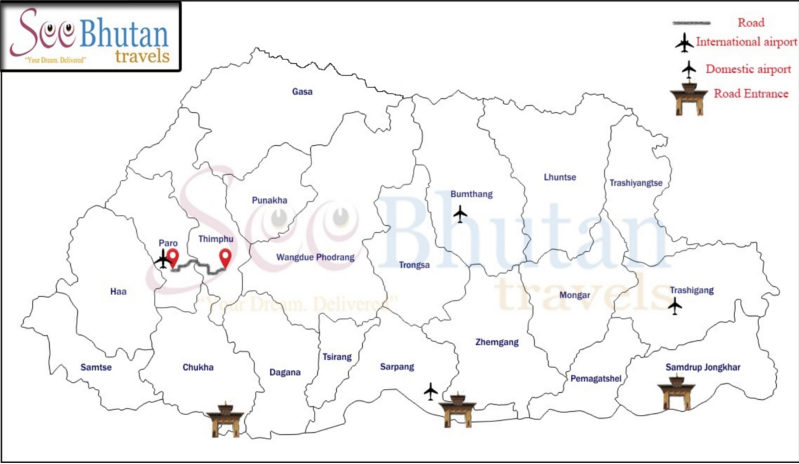 After landing, guide and driver from See Bhutan Travels will pick you up from Paro international airport. Towards afternoon we will pay visit to Paro Ta Dzong (museum) and Kichu Lhakhang.

Paro Ta Dzong: Located on a spur above Rinpung Dzong, five and a half kilometers’ drive from Tshongdu town, the dzong was built in the mid-17th century as a watchtower overlooking Rinpung Dzong by Lanyongpa Tenzin Drukdra and Chogyal Migyur Tenpa. The circular Dzong houses the National Museum of Bhutan.

After breakfast we will visit to Paro Rinpung Dzong, the venue of Paro Tshechu. Like any other festival in Bhutan, mask dances known as Cham in local languages are the main event of Paro Tshechu. Native folk dances are also performed during the festival.

During this festival, one will enjoy a spectacular view of Bhutanese culture being displayed by the Tshechu viewers. The way they dress with those hand women Bhutanese national dress (Gho for men and Kira for women), the jewelries and necklaces put on by ladies, the delicacies that people pack for their lunch, friends and families getting together will be a thing of beauty to witness.

Today we will head towards capital city of Bhutan. Once at Thimphu, we will explore following sites:

Located on the bank of the Wangchu River in the Hejo village, Tashicho Dzong was built in 1641 by Zhabdrung Ngawang Namgyal and enlarged in 1694 by Gyalse Tenzin Rabgay.  It was entirely rebuilt under the command of Third King Jigme Dorji Wangchuck in 1962. Today, the dzong is the seat of the central government, His Majesty the King’s office, and the summer residence of the Central Monastic Body.

After an early breakfast we will drive towards Paro Taktsang base from Thimphu, which will roughly take about 1 hour and 20 minutes. Taktsang monastery to Bhutan has become like an Eifel tower to Paris. The hike on average will take around 6 hours in total. Horse riding facilities are available (own expense) till view point while hiking up towards the monastery.

After subdueing, Guru Rimpoche meditated here for 3 years. The monastery was later built in 1694 by 4th Druk Desi (secular head of the country), Gyalse Tenzin Rabgye. Tragically, the monastery was gutted down by fire in the year 1998 but soon it was restored to its former glory.

After breakfast, guide and driver will see you off at Paro international airport for your onward destination.