Druk Wangyal Tshechu is held annually at Druk Wangyal Lhakhang located at Dochula pass during the cold winter month of December. The festival features both traditional and newly choreographed mask dances and folk dances, some of which are dedicated to 4th King of Bhutan and Royal Bhutan Army who fought bravely against the Indian militants camping in the jungles of Bhutan and flushing them out in the year 2003. 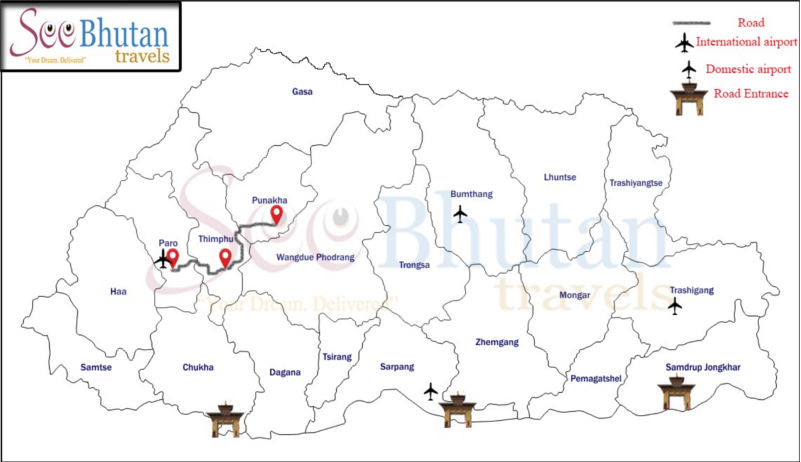 Representative from See Bhutan Travels will pick you up from Paro International airport and transfer to your hotel. After Lunch we will drive around Paro valley and pay visit to following places:

Paro Ta Dzong: Located on a spur above Rinpung Dzong, five and a half kilometres’ drive from Tshongdu town, the dzong was built in the mid-17th century as a watchtower overlooking Rinpung Dzong by Lanyongpa Tenzin Drukdra and Chogyal Migyur Tenpa. The circular dzong houses the National Museum of Bhutan.

After breakfast, we will drive towards Thimphu, the capital city of Bhutan. It is located 65 km east of Paro. At Thimphu we will be visiting to following places:

1. Memorial Chorten: Located in the heart of Thimphu city, it was built in 1974 by Her Majesty the Queen Mother Ashi Phuntsho Choden in memory of her son, Third King Jigme Dorji Wangchuck. The three-storey Chorten houses several relics such as Phurba Lhatshog, Kagay, Khrowo Nampur Gyalwa, Guru Tshengye, and Khenlop Chesum. The Chorten is today the spiritual nerve center of the city.

2. Buddha Statue: Located at Kuenselphodrang, facing Thimphu valley down bellow is the worlds’ largest and tallest Buddha statue standing at the height of 169 feet (52 m). The statue houses one hundred thousand of smaller Buddha statues, the exact replica of the outer Buddha statue. From here one can have a 360 degree view of Thimphu valley.

4. Tashicho Dzong: Located on the bank of the Wangchu River in the Hejo village, Tashicho Dzong was built in 1641 by Zhabdrung Ngawang Namgyal and enlarged in 1694 by Gyalse Tenzin Rabgay.  It was entirely rebuilt under the command of Third King Jigme Dorji Wangchuck in 1962. Today, the dzong is the seat of the central government, His Majesty the King’s office, and the summer residence of the Central Monastic Body.

After early breakfast at Thimphu we will drive towards Dochula pass, located 23 km east of Thimphu town to witness the festival. We will spend half of our day here, witnessing festival, mingling with locals who have come for the festival and enjoying the spectacular view of snowcapped mountains at the backdrop. Towards afternoon, we will start descending down towards Punakha valley.

Overnight: At hotel in Punakha.

After subduing, Guru Rimpoche meditated here for 3 years. The monastery was later built in 1694 by 4th Druk Desi (secular head of the country), Gyalse Tenzin Rabgye. Tragically, the monastery was gutted down by fire in the year 1998 but soon it was restored to its former glory.

Towards evening, after reaching back from Taktsang monastery, we will visit to Drugyal Dzong and Kichu Lhakhang.

Drugyal Dzong: Located in Phongdey village in Paro, the Dzong was built as one of the principal Dra Dzong (defense dzongs). While some attribute the building of the Dzong to Zhabdrung Ngawang Namgyal in 1649 to commemorate a victory over Tibetan invasion, some attribute it to the second Druk Desi Tenzin Drukdra. But as its name suggests (Druk – Drukpa; gyal – victory), the Dzong was built to celebrate the victory over Tibetans. The Dzong was used as the summer residence of Rinpung Rabdey until 1951 when it was completely burnt down. The Dzong is currently being rebuilt to its former glory to celebrate the birth of crown prince Jigme Namgyel.

After breakfast, your guide and drivel will see you off at Paro international airport for your onward destination.