Black neck crane festival is celebrated annually at Phobjikha valley during the month of November to welcome these migratory birds from northern India and Tibetan Plateaus for its winter roosting destination. Festival is initiated by Royal Society for protection of Nature (RSPN) to encourage and instill conservation values to the locality. Various folk dances by local communities are showcased during this festival. While enjoying a quality time in Bhutan, if you can time your visit to Phobjikha valley with this festival will be a great deal. 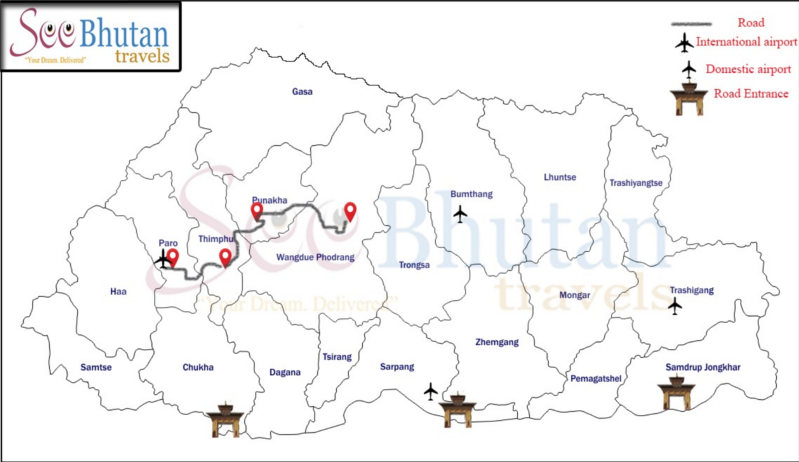 There will be spectacular views of Mt Everest (8,848 m), Kanchenjunga (8,586m) and Lhotse (8,414 m); and a literal adrenaline-pumping landing on the roof of the world. Your flight to Paro, the country’s only international airport, will be an exhilarating experience, as the route traverses parallel to the mighty Himalayas enabling passengers to see the world’s highest peak, Mt Everest, and many more. The descent affords a panoramic view of Bhutan’s foothills culminating into a thrilling landing at what is considered one of the world’s most challenging airports. Our Company’s representative will meet you at the airport and lead you to the hotel for lunch.

Your first visit will be Paro National Museum, which was once a watch tower and today houses some of the Kingdom’s historical treasures. You will also visit Paro Dzong (Fortress), which is the head quarters of Paro District and Kyichu Lhakhang, one of the 108 monasteries believed to be built in a day by the Tibetan Buddhist King Songsten Goempo in the 7th century. Then you will stroll through the town calling it a day. Overnight at hotel in Paro

The drive from Paro to Thimphu is just under an hour. There are great many places to see in Bhutan’s capital. In the morning we will drive to Buddha Point which provides a spectacular 360 degree close quarter view of entire Thimphu and the adjoining areas. This is the site of the world’s tallest statue of Shakyamuni Buddha. Our next destination is the 12th century Changangkha Temple, Takin Zoo and the viewpoint at Sangaygang. On our way back, we stopover at a nunnery, the Folk Heritage Museum and the Textile Museum. After lunch, we will proceed to Tashichho Dzong, a 17th century castle-fortress which today houses the offices of the King, Chief Abbot and government ministries. We will also take the opportunity to see the nearby parliament complex, the School of Arts and Crafts, vegetable market, and then spend the rest of the day watching an archery match and strolling around the town.

After breakfast, we will start driving towards Phobjikha which is around 135 km from Thimphu. After reaching there we will spent rest of the hour enjoying the natural places around Phobjikha. Overnight at Hotel.

Today you will witness the highlight of your holiday, the black necked crane festival, which is held at the courtyard of Gangtey Monastery. It is a community based festival where all the locals come together to celebrate the arrival of this endanger bird. The annual black-necked crane festival is organized to generate awareness and understanding on the importance of conserving the endangered Black‐necked cranes; to strengthen the linkages between conservation, economic welfare and sustainable livelihoods of the community; provide an avenue for the local community to renew their commitment to conservation of the black-necked cranes, and to showcase their cultural heritage and skills.

The festival includes cultural programs such as folk songs and dances (some with black-necked crane themes) and mask dances performed by the local people, crane dances and environmental conservation-themed dramas and songs by the school children.  The program usually starts by 9:30 am and lasts till late afternoon.

The drive from Phobjikha to Punakha will take around 3 hours. Once you arrive at Punakha you will be visiting Khamsum yuelly Namgyel and Punakha Dzong, which looks like a giant ship rocked on a still mass of water from far. Built on the confluence of two rivers, the Pho (male) and Mo (female) rivers, the Dzong served as the capital of Bhutan until 1955 and is still home of the Chief Abbot in winter months. It was built in 1637 by Zhabdrung Ngawang Namgyal and has played a prominent role in the civil and religious history of the Kingdom. Destroyed four times by fire and an earthquake in 1897, the Dzong has been now fully restored in its original splendor.

After having breakfast, we will start driving towards Paro. On the way we will visit Chimi Lhakhang, a temple where the Phallus is worshipped and associated with Lam Drukpa Kuenley, the “Divine Madmonk”, and this temple worship as the Temple of Fertility.

After breakfast, we drive for half an hour and start the hike, which is about 5 hours (round trip.) The trail is along an ancient path marked by river powered prayer wheels. As you reach Taktshang you will be struck by the architectural wonder of this most pious Buddhist shrine in Bhutan. Perched some 1000m, 3000ft on a cliff overlooking the valley, it would justifiably qualify as one of Bhutan’s wonders. Tragically wrecked in a fire early in 1998, it has been rebuilt to its original glory. It is said that the legendary Indian saint, Guru Padma Sambhava, flew from Tibet on the back of a tigress to tame five demons, who were opposing the spread of Buddhism in Bhutan in 746 A.D. Hence the name, Taktshang, or the “Tiger’s Lair”. On our way back, we will visit another symbolic structure, which is now in ruins, the Drugyel Dzong, or “Castle of the Victorious Drukpa,” which was also built by the Shabdrung to commemorate Bhutan’s victory over the Tibetans in the 16th and 17th centuries. From here, the Jomolhari Peak (“Mountain of the Goddess”) can be seen on a clear Day (Alt. 7,329m/24,029ft.). The next stop will be at Kyichu Monastery, one of Bhutan’s oldest, built in 659 A.D. by the Tibetan King Songsten Goembo. On arrival at Paro, we will visit the Paro Rimpong Dzong (Fortress), which was built in 1646 and also ta Dzong, the watch tower. Overnight at hotel in Paro

After your breakfast we will drive towards Paro international airport for your onward destination.