This 10-days itinerary will take you to central region of Trongsa and Bumthang district. A highlight of the tour includes exploring Bumthang valley, the cultural heartland of Bhutan and hike to Taktsang monastery. While touring Bhutan, you will be driven across gorgeous mountain passes, lush green valleys, ever winding glacial fed rivers and beautiful villages.

If you want to avoid long drive back on the same road after touring Bumthang, you can opt to take a domestic flight back from Bumthang to Paro or directly fly from Paro to Bumthang and continue your journey on the road from Bumthang till Paro. 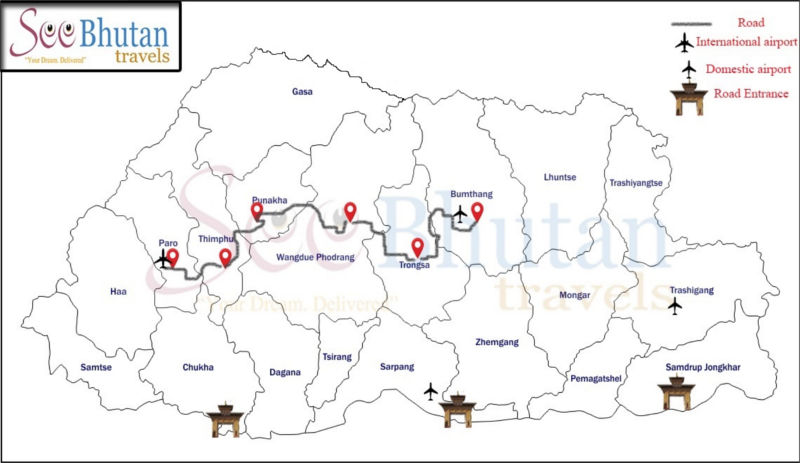 After an unforgettable flight into Paro International Airport, wherein you would have feasted on some of the wonders of the Himalayas, such as views of Mount Everest, Kanchenjunga and other famous Himalayan peaks, including Bhutan’s Jomolhari and Mount Jichu Drake, you will have a thrilling landing. At the airport, you will be received by representatives of our Company, who will escort you to a Hotel. After lunch at the hotel, you will be driven to Thimphu, the capital city of Bhutan. . It is also the hub of commerce and culture. Paro to Thimphu is just under an hour. There are great many places to see in Bhutan’s capital. Evening will be dedicated in strolling through the town. Overnight at hotel in Thimphu

The morning will be dedicated to sightseeing. You will visit the weaving centre, Memorial Chorten (a huge stupa) built in memory of the third King of Bhutan, Jigme Dorji Wangchuck, Changangkha monastery, built in the 12th century, Takin zoo, Buddha Point, where the statue of the world’s largest Buddha is being constructed; a Nunnery and the Arts and Craft school. You will also be taken to Sangaygang, a place from where you can have a bird’s eye view of Thimphu town and the surroundings. After lunch, visit National Library where ancient manuscripts are preserved, the Folk Heritage museum and the Tashichho Dzong, the main secretariat building. This massive structure houses part of the government Ministries, the office of the King and the Throne Room. It also houses the State Monastic Body and the living quarters of the Chief Abbot and the senior monks. Overnight at the hotel

The drive to Punakha traverses thorough a constantly changing landscape of vegetation, waterfalls, flowers, mountains and meadows. After a 45 minutes drive, we will stop at the popular Dochula pass (3,100m), from where on a clear day, we can see the entire eastern Himalayan range, comprising snow-capped mountains with heights ranging from 6000m to 7554m. Apart from its wealth of extremely beautiful flowers, the 108 Buddhist stupas exquisitely built around a mound adds to the grandeur of the place. The journey forward from the pass descends to the sub-tropical valley of Punakha, which served as Bhutan’s capital in the past and holds some of the country’s most priceless treasures, especially Buddhist relics. The Punakha Fortress is an architectural masterpiece and resembles a gigantic ship on an ocean floor from afar, and girdled by two (Male and Female) rivers. It was the capital of Bhutan until 1955 and is still home of the Chief Abbot in winter months. On the way to Punakha, we will hike for about 1 hour round trip to Chimi Lhakhang, the monastery of Drupa Kuenley, “Divine Madmonk,” which was built in the 15th century. Punakha Dzong, built in 1637 by Shabdrung Ngawang Namgyal has played prominent role in civil and religious life of the Kingdom. Destroyed four times by fire and an earthquake in 1897, the Dzong has been now fully restored in its original splendour. After Lunch at a local restaurant, we will visit Punakha Dzong and then drive for half an hour and hike to the Khamsum yully namgyel chorten. Overnight at the hotel

Early morning, we will drive to Trongsa via Wangduephodrang across the Pelela pass (alt. 3,300m), the traditional boundary between east and west. Large prayer flags mark the place. En-route, we will stop at Chendbji Chorten (Stupa), which was built in the 18th century by a lama named Shida. The stupa is Nepalese in style with eyes painted at four cardinal points. Towards evening, you will stroll through the town calling it a day. Overnight at hotel in Trongsa.

After breakfast walk to Tongsa Dzong, built by Shabdrung in 1647. Another majestic architectural masterpiece and once ancient Bhutan’s capital, it is very historic and every King, before ascending the Throne must, as the Crown Prince serve as the Penlop (Governor) of Trongsa. We will also visit the Ta Dzong (watch tower) and then drive to Bumthang which is about 3 hours. 29 Kms from Tongsa we will reach the Yutong La pass (alt. 3,400 m) and after a further 13 kms drive, the road enters into a wide, open and cultivated valley known as Chumey valley. On arrival in Bumthang, check into a hotel. Evening, you can stroll through the Chamkhar town. Overnight at hotel.

One of the most sacred regions in the Kingdom, Bumthang valley is a blend of the abstract and concrete with innumerable legends surrounding the area. You will be visiting Kurje Lhakhang where the Great Indian Saint Guru Padsambhava subdued a local demon and left his body imprint on a rock. The other is Jamphel lhakhang, which was built in the 7th century by Songsten Goembo, the Tibetan Buddhist King. Jakar Dzong (the fortress of white bird) built in the 17th century by Tenzin Rabgay (the fourth Desi) is another famous landmark. You will also be visiting, Tamshing lhakhang built in 1501 by Terton Pema Lingpa (the founder of religious treasures). Kunchosum lhakhang and Membertsho (the flaming lake) are other places. Legend has it that Pema Lingpa discovered several religious texts from the lake. Overnight at the hotel

After breakfast we proceed to Gantey/Phobjikha via Trongsa. The approach to Phobjikha valley is through a forest of Oak and Rhododendron. Phobjikha is one of the few glacial valleys in Bhutan and chosen home of black necked cranes which migrate from the central Asiatic Plateau to escape its harsh winters. Overnight at hotel.

After breakfast, explore Phojikha valley and also visit Gangtey Monastery. Phobjikha is one of the most beautiful valleys in Bhutan and home to the very rare black necked crane. The birds migrate from Tibet to Bhutan in winter (from October -March). Gangtey Gompa is one of the oldest Nyingmapa monasteries that look like a small Dzong. Phobjikha valley is mostly covered with high altitude dwarf bamboo and pine trees. There are impressive carvings of art and wood on farm house. You could interact with the people and get to know more about their way of life. Then we drive to Paro via Wangduephodrang. Overnight at the hotel.

Takstang monastery is one of Bhutan’s holiest shrines and an amazing structure that crosses all boundaries of architectural masterpiece, Taktsang (Tiger’s Lair) monastery is perched some 1000m/3000ft on a cliff overlooking a valley. It is said that the legendary Indian saint, Guru Padma Sambhava, flew from Tibet on the back of a tigress to tame five demons, who were opposing the spread of Buddhism in Bhutan in 746 A.D. Taktshang monastery is the ultimate pilgrim site for all Buddhist, especially in Bhutan. The hike to the monastery takes about 5 hours (up and down), and follows an ancient path marked by river powered prayer wheels. We will visit Kyichu Monastery, one of Bhutan’s oldest, built in 659 A.D. by the Buddhist Tibetan King Songsten Goembo. A short drive from there will take us to the ruins of Drugyel Dzong (”Castle of the Victorious Drukpa”), which was built to commemorate the victory of Bhutanese forces over the Tibetans in the 16th and 17th centuries. You will also visit the National Museum and Paro Rimpong Dzong. You can take a stroll of the town after which you can call it a day. Overnight at hotel in Paro

After early breakfast, we drive to the airport for flight to onward destination.