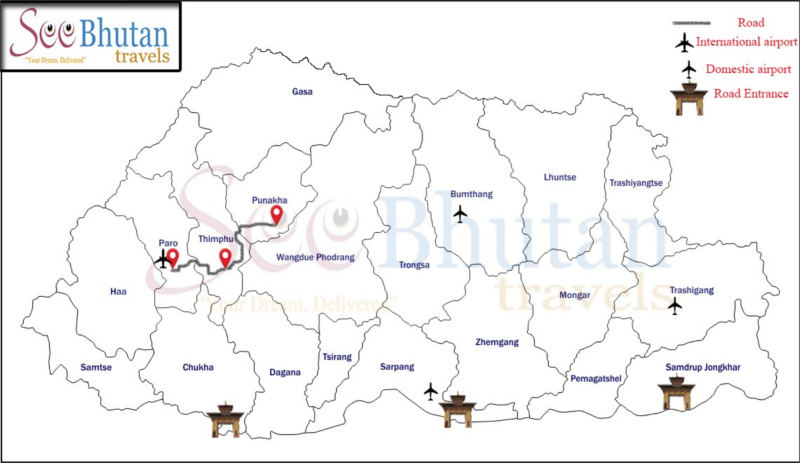 You will land at Paro international airport, after having experienced one of your most memorable flights with the airline taking you through skies offering spectacular glimpses of the Himalayan Ranges, including Mt Everest, Kanchenjunga and other Bhutanese peaks. The landing, supposed to be at one of the most challenging airports is also thrilling. Our company’s representative will meet you and escort you to a local hotel, after which begins your adventure of Bhutan. It will start with sightseeing or glances into Paro’s most historic and significant landmarks, such as the National museum and Paro Rimpong Dzong (Fortress). After lunch at a hotel in Paro town, we will drive for an hour to the capital of Bhutan, Thimphu. Overnight at hotel.

In the morning, we will visit the Memorial Chorten (a huge stupa), one of the most beautiful stupas of the Nygmapa sect of Buddhism, built in memory of the Father of Modern Bhutan, the late Third King, Jigmi Dorji Wangchuck. The next stop will be Changangkha monastery built in the 12th century, after which we will move to the Takin Zoo. A brief drive from the Zoo takes us to Sangaygang, from where one can see the entire Thimphu Valley and beyond. We will also visit a Nunnery. After lunch at a local restaurant, we will visit the arts and crafts school, where you can see Bhutanese art in the making. A visit will also be made to the Post Office. If time permits, we will watch an archery match. In the evening will be the hallmark of your visit, as we go to Tashichho Dzong, the center of Bhutanese governance. Majestic and an icon of Bhutanese architecture, it houses the office of the King, the Throne Room and some ministries. It is also the summer residence of the Chief Abbot, the Je Khenpo and senior clergy. The day will end with a visit to Buddha point, where the largest statue of the futuristic Buddha, Maitreya is under construction. From there you can get an overview of Thimphu valley, yet again. Overnight at a hotel.

We begin our journey to Punakha. After about 45 minutes, we reach Dochula pass (3,100m), from where we get the first spectacular view of the eastern Himalayan ranges, consisting of snow-capped mountains, with heights ranging from 6000m to 7554m.The beauty of the pass is augmented by the spectacular 108 stupas (chortens), build around a mound. From the pass, it is a gradual descend along outgrowths of rhododendron, short bamboo and other tress to the subtropical valley of Punakha and Wangduephodrang. At Wangdue, we will visit the ruins of Wangduephodrang Dzong (Fortress), which was gutted by a tragic fire in 2012. It was originally build by the Shabdrung in 1638. We then move to Chimey Lhakhang, built in the 15th century and associated with Lam Drukpa Kuenley, the “Divine Madmonk.” It is just an hour walk (back and forth) from the road point. After lunch at the Lhakhang, we move to Punakha. As we reach Punakha, we can see the Dzong (Fortress), resembling a giant ship bed rocked on a mass of still water from far. Built by the Shabdrung in 1637, it is an architectural icon, located at the confluence of two rivers – the Pho (male) and the Mo (female) chus (rivers). The winter residence of the Chief Abbot and the clergy, it houses most of Bhutan’s sacred relics and treasures. A visit will also be made to Khamsumyulley Namgyal chorten. Overnight at a hotel.

We begin our journey back to to Paro, which would take about four hours. After lunch, we will visit Kyichu Monastery, one of Bhutan’s oldest, built in 659 A.D. by the Buddhist Tibetan King Songsten Goembo. A short drive from there will take us to the ruins of Drugyel Dzong (”Castle of the Victorious Drukpa”), which was built to commemorate the victory of Bhutanese forces over the Tibetans in the 16th and 17th centuries. You will then be taken to visit a farmhouse, after which you can call it a day.

This is going to be one of your most memorable experiences as we visit Taktsang Monastery (Tiger’s Lair), a work of art, blending the spiritual with architectural splendor. One of the holiest shrines in Bhutan, the Monastery is perched on a hill (1000m) overlooking the valley. It is said that the great Indian Saint and Tantric Buddhism’s Master, Guru Padma Sambhava came to Taktsang riding a tigress, in one of his most fearful forms, to subdue demons that were obstructing the spread of Buddhism. Several Buddhist masters have meditated at the site. The trek, in total takes five hours and it is a gradual climb along an old trail. After the trek, you can stroll through Paro town, before you rest for the day.

After breakfast, you will be driven to Paro international Airport for your flight out of the country.