A week long visit to Drukyul

This week long tour will take you and your family across four westerns districts of Bhutan, covering all the important and ancient tourists’ sites. A week in Bhutan gives you enough time to feel for Bhutanese culture and get chance to embark into off the beaten track. Highlight of this tour includes visiting to historical sites, hiking to majestic Tiger’s nest monastery and journey to beautiful glacial valley, Phobjikha. 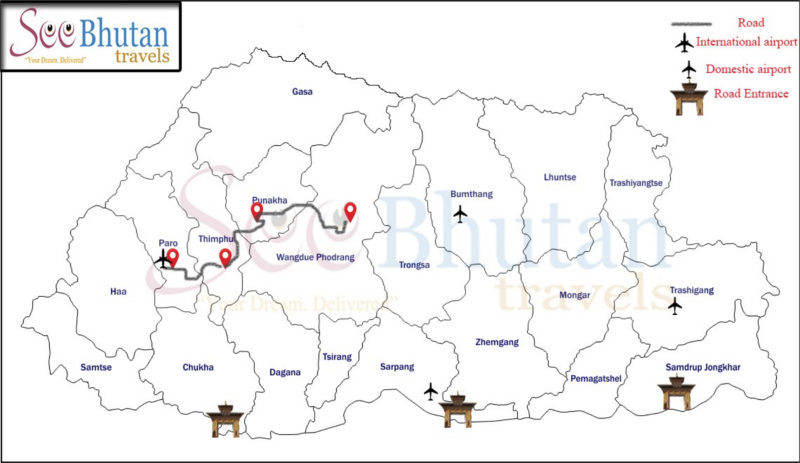 Arrive at Paro international Airport. The flight will be a breath taking experience as you will be able to see the treasures of the Himalayas, embodied in majestic forms, such as Mount Everest, Kanchenjunga, Jomolhari, Mount Jichu Drake and others. The landing at Paro will be a thrilling moment, too. Representatives from our company will meet you at the airport, after which you will drive for about an hour to Thimphu, Bhutan’s capital city. After lunch, the rest of the Day will be dedicated to sightseeing. Highlights will include the Memorial Chorten (Stupa), one of the most beautiful ones in Bhutan, built in memory of the Father of Modern Bhutan, Late Third King Jigmi Dorji Wangchuck. You will also be visiting the Handicrafts Emporium where Bhutanese textiles and other arts and crafts displayed can be purchased and the Hand-made paper factory. Other visits include the Weaving centre, Changangkha monastery built in the 12th century, takin zoo, a Nunnery and to Sangaygang, from where you can have a picturesque view of Thimphu valley. Overnight at Hotel in Thimphu

In the morning, you will enjoy a drive along a trail that follows the Thimphu Chu (river) till the base of Tango and Cheri monasteries. From there, we will hike to Tango monastery, built in the 12th century and which is to Day a center of Buddhist learning. We will also hike to Cheri monastery, a popular meditation center, which was built in the 16th century. Lunch will be a picnic lunch in one of the spots of the hike. Upon our return to Thimphu, in the evening we will visit Tashichho Dzong, the main secretariat building, which was built in 1642. This massive structure houses the office of the King, the Throne Room and part of the government Ministries. It is also home to the State Monastic Body and the living quarters of the Chief Abbot and senior monks. Wind up the day with a stroll around Thimphu town. Overnight at hotel in Thimphu

We will be moving further away from Thimphu to Punakha, which is a three hour drive. 45 minutes from Thimphu is the Dochula pass (3,100m), offering you the first glimpse of the eastern Himalayan Ranges, consisting of snow-capped mountain peaks with heights ranging from 6000m to 7554 meters? During the stopover there, you can also see the 108 stupas (chortens) built around a mound. The drive then descends and passes through beautiful forests, comprising rhododendron, fields of dwarf bamboo green meadows, beautiful wildflowers, gushing waterfalls and constantly changing vegetation. Before reaching Punakha, we will visit Chimi Lhakhang, a temple where the Phallus is worshipped and associated with Lam Drukpa Kuenley, the “Divine Madmonk.” It is about 1 hour hike (to and fro) from the road point. We will have our lunch here. As we near our next destination, Punakha, we will witness an awe-inspiring image of the Punakha Fortress, which looks like a giant ship rocked on a still mass of water from far. Built on the confluence of two rivers, the Pho (male) and Mo (female) rivers, the Dzong served as the capital of Bhutan until 1955 and is still home of the Chief Abbot in winter months. It was built in 1637 by Shabdrung Ngawang Namgyal and has played a prominent role in the civil and religious history of the Kingdom. Destroyed four times by fire and an earthquake in 1897, the Dzong has been now fully restored in its original splendour. In the afternoon we will drive half an hour and hike to the Khamsum yuelly Namgyel chorten. Overnight at hotel in Punakha

After breakfast, we begin the 105 km drive to Gangtey via Wangduephodrang. It will take us about 4 hours with the road gradually ascending till Lawala pass (1100 feet). Passing through Nobding village, the vegetation consists of high altitude dwarf bamboo, rhododendrons flowers, and Magnolia, fir and pine trees. We will reach Phobjikha valley at 3,000m, in the Black Mountain Ranges. Phobjikha is one of the most beautiful valleys in Bhutan and home to the very rare black necked crane. The birds migrate from Tibet to Bhutan in winter (from October -March). We will be visiting Gangtey Gompa, one of the oldest Nyingmapa monasteries that look like a small Dzong. Then you can visit the beautiful Phobjikha valley. This valley is mostly covered with high altitude dwarf bamboo and pine trees. There are impressive carvings of art and wood on farm house. You could interact with the people and get to know more about their way of life. Overnight at Farm house or hotel

We will be driving for six hours to Paro and on the way visit Wanduephodrang Dzong, which was built in 1638 by the Zhabdrung. However, a tragic fire in 2012 has brought the Fortress to the ground and it is today in ruins. We will take a short stroll through Wangdue town and have lunch there. On the way, there will be a stopover at Dochula pass once again. The drive will extend till Paro town. Overnight at hotel in Paro

After breakfast, we drive for half an hour and start the hike, which is about 5 hours (round trip.) The trail is along an ancient path marked by river powered prayer wheels. As you reach Taktshang you will be struck by the architectural wonder of this most pious Buddhist shrine in Bhutan. Perched some 1000m, 3000ft on a cliff overlooking the valley, it would justifiably qualify as one of Bhutan’s wonders. Tragically wrecked in a fire early in 1998, it has been rebuilt to its original glory. It is said that the legendary Indian saint, Guru Padma Sambhava, flew from Tibet on the back of a tigress to tame five demons, who were opposing the spread of Buddhism in Bhutan in 746 A.D. Hence the name, Taktshang, or the “Tiger’s Lair”. On our way back, we will visit another symbolic structure, which is now in ruins, the Drugyel Dzong, or “Castle of the Victorious Drukpa,” which was also built by the Shabdrung to commemorate Bhutan’s victory over the Tibetans in the 16th and 17th centuries. From here, the Jomolhari Peak (“Mountain of the Goddess”) can be seen on a clear Day (Alt. 7,329m/24,029ft.). The next stop will be at Kyichu Monastery, one of Bhutan’s oldest, built in 659 A.D. by the Tibetan King Songsten Goembo. On arrival at Paro, we will visit the Paro Rimpong Dzong (Fortress), which was built in 1646 and also ta Dzong, the watch tower. Overnight at hotel in Paro

After breakfast, you will be driven to Paro international Airport for your journey out of Bhutan.