This is a complete western Bhutan tour, covering all five western districts of Bhutan including Paro, Thimphu (capital), Punakha, Wangduephodrang and Haa. Highlight of the tour includes visit to Chelela Pass, Dochula pass, Gangtey valley and hike to Taktsang monastery. 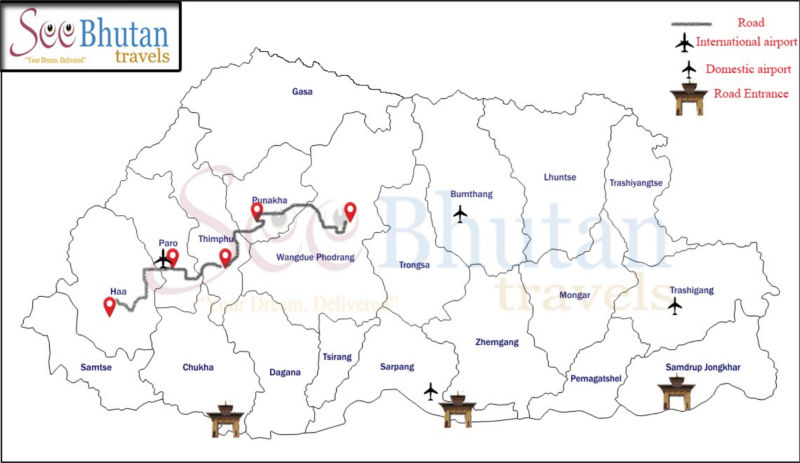 Welcome to the land of Thunder Dragon. Representative from See Bhutan Travels will welcome you at Paro international airport. Get transferred to your hotel and enjoy your lunch.

After lunch we will visit to following sites:

At Thimphu we will visit to following places:

4. Tashichho Dzong: Located on the bank of the Wangchu River in the Hejo village, Tashicho Dzong was built in 1641 by Zhabdrung Ngawang Namgyal and enlarged in 1694 by Gyalse Tenzin Rabgay.  It was entirely rebuilt under the command of Third King Jigme Dorji Wangchuck in 1962. Today, the dzong is the seat of the central government, His Majesty the King’s office, and the summer residence of the Central Monastic Body.

Today we will spend our day exploring around Thimphu valley and taking a short hike to Tango Monastery.

The monastery’s name honours Phajo Drugom Zhigpo’s meeting with the horse-headed deity Tandin (Hayagriva) who prophesied that Phajo would help the teachings of Drukpa Kagyu flourish in Bhutan.  The monastery was visited by many great masters and it contains many sacred relics. The monastery today houses the College of Buddhist Studies.

If time permits, towards evening we will visit to Simtokha Dzong (fortress).

After breakfast, head out towards Punakha, located 77 km east of Thimphu via Dochula pass.

On the way we will visit Temple of Fertility; Khemae Lhakhang.

After arriving at Punakha pay visit to Punakha Dzong and hike to Khamsum Yuley Namgyal Choeten.

Gangtey valley, located 78 km east of Punakha is a beautiful and one of most scenic glacial valley of Bhutan. This valley serves as roosting spot for Black necked crane, one of the rarest and endangered species of bird which migrates during winter months (November, December, January, February) from Tibetan plateaus and northern region of India.

After arriving at Gangtey, we will go around for a short hike enjoying the scenic view of the valley and towards evening pay visit to Gangtey monastery. We will also visit to nearby villages and mingle with local people.

Begin your journey back towards Paro valley. On the way spend some time at Dochula Pass before descending down towards Paro.

After breakfast, drive towards Taktsang base from where the hike begins.

Drugyal Dzong: Located in Phongdey village in Paro, the Dzong was built as one of the principal Dra Dzong (defence dzongs). While some attribute the building of the Dzong to Zhabdrung Ngawang Namgyal in 1649 to commemorate a victory over Tibetan invasion, some attribute it to the second Druk Desi Tenzin Drukdra. But as its name suggests (Druk – Drukpa; gyal – victory), the Dzong was built to celebrate the victory over Tibetans. The Dzong was used as the summer residence of Rinpung Rabdey until 1951 when it was completely burnt down. The Dzong is currently being rebuilt to its former glory to celebrate the birth of crown prince Jigme Namgyel.>

Today we will travel to Haa, the extreme western district of Bhutan via Chelela Pass. Located at 3988 m above sea level, Chelela pass is the highest motor able pass in Bhutan from where one can enjoy a spectacular view of Himalayan ranges. After arriving at Haa, we will enjoy driving around witnessing the local farmers farming around. Towards evening drive back to Paro.