This weeklong tour of Bhutan includes visits to four western districts of Bhutan -Paro, Thimphu (capital), Punakha and Wangduephodrang. Highlight of the tour includes hiking to the famous Taktsang Monastery and a visit to Gangtey valley, the most beautiful valley of Bhutan. 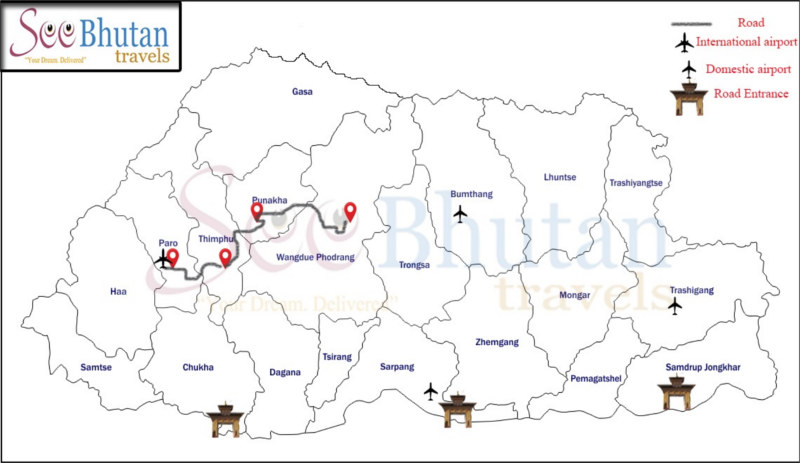 Today we will be exploring around Thimphu valley and visit to following sites:

3. Tashichho Dzong: Located on the bank of the Wangchu River in the Hejo village, Tashicho Dzong was built in 1641 by Zhabdrung Ngawang Namgyal and enlarged in 1694 by Gyalse Tenzin Rabgay.  It was entirely rebuilt under the command of Third King Jigme Dorji Wangchuck in 1962. Today, the dzong is the seat of the central government, His Majesty the King’s office, and the summer residence of the Central Monastic Body.

After breakfast, we will be heading towards Punakha; located 77 km east of Thimphu via Dochula pass.

On the way before reaching Punakha, we will pay visit to Temple of Fertility (Khemae Lhakhang).

After arriving at Punakha pay visit to Punakha Dzong.

Gangtey valley; located 78 km east of Punakha is a beautiful and most scenic glacial valley of Bhutan. This valley serves as roosting spot for Black necked crane, one of the rarest and endangered species of bird which migrates during winter months (November, December, January, February) from Tibetan plateaus and northern region of India.

After arriving Gangtey, we will go around for a short hike and towards evening pay visit to Gangtey monastery. We will also visit to nearby villages and mingle with local people.

After breakfast, drive towards Taktsang base from where the hike begins.