Within this six days tour of Bhutan, you will be visiting to three western districts, Paro, Thimphu (capital) and Punakha. Highlight of the tour includes hiking to Taktsang Monastery, visit to Punakha Dzong, National Museum, world’s largest Buddha statue and Tashichho Dzong. 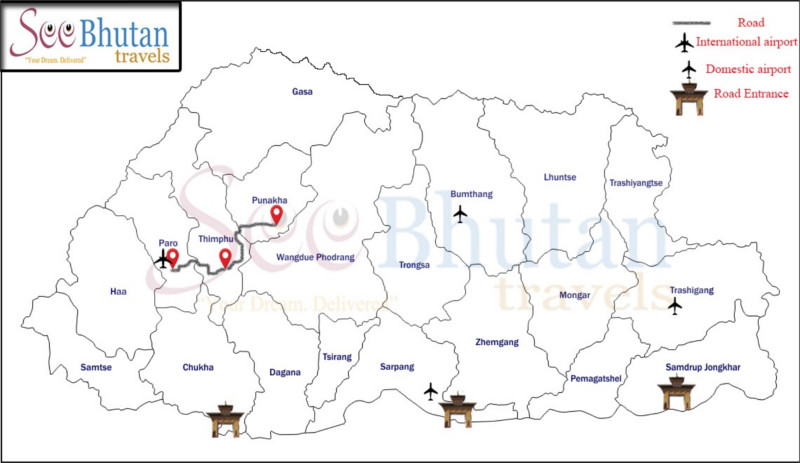 Today we will be exploring around Thimphu valley and pay visit to following sites:

3. Tashichho Dzong: Located on the bank of the Wangchu River in the Hejo village, Tashicho Dzong was built in 1641 by Zhabdrung Ngawang Namgyal and enlarged in 1694 by Gyalse Tenzin Rabgay.  It was entirely rebuilt under the command of Third King Jigme Dorji Wangchuck in 1962. Today, the dzong is the seat of the central government, His Majesty the King’s office, and the summer residence of the Central Monastic Body.

After breakfast, head out towards Punakha, located 77 km east of Thimphu via Dochula pass.

On the way we will visit Temple of Fertility (Khemae Lhakhang).

After arriving at Punakha pay visit to Punakha Dzong.

3. Paro Ta Dzong (national museum): Located on a spur above Rinpung Dzong, five and a half kilometres’ drive from Tshongdu town, the dzong was built in the mid-17th century as a watchtower overlooking Rinpung Dzong by Lanyongpa Tenzin Drukdra and Chogyal Migyur Tenpa. The circular Dzong houses the National Museum of Bhutan.

The monastery is located 900 m above Paro valley on the face of a rocky cliff. Taktsang is perhaps the most famous monastery in the country. The monastery was named Taktsang after Guru Rinpoche flew there from Kurtoe Singay Dzong (Eastern Bhutan) riding on a tigress to subdue a demon. Gyalse Tenzin Rabgay, the secular head of the country (1680-1694) has begun the construction of the monastery at this site in 1692 and completed in the year 1694. The monastery houses many temples that contain sacred statues of eight manifestations of Guru Rinpoche, Tshepame Yabyum and Bone relic of Pelgi Singay.