This 4 day tour package includes visit to two western district of Bhutan, Paro and Thimphu (capital). The highlight of this tour includes a 6 hour round trip hike to Bhutan’s iconic monastery, the Tiger’s Nest. 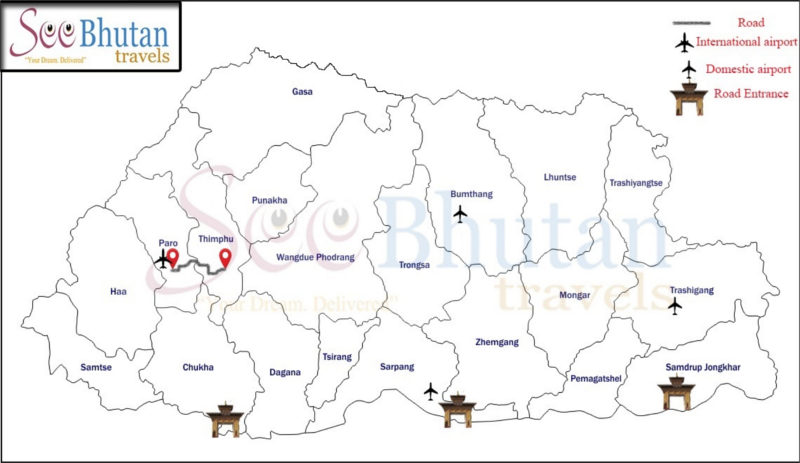 In the morning pay visit to following places:

2. Buddha Statue: Located at Kuenselphodrang, facing Thimphu valley down bellow is the worlds’ largest and tallest Buddha statue standing at the height of 169 feet (52m). The statue houses one hundred thousand of smaller Buddha statues, the exact replica of the outer Buddha statue. From here one can have a 360 degree view of Thimphu valley.>

3. Simtokha Dzong: Located around 5 km south of Thimphu town, Simtokha Dzong is the oldest Dzong in Bhutan built by Zhabdrung Ngawang Namgyal in 1629, it is believed to have been built over a stone onto which Zhabdrung Rinpoche pinned down a demon and subdued it. The Dzong contains the bed chambers of Zhabdrung and Desi Jigme Namgyal, the father of the first King of Bhutan. Formally known as Sanga Zabdon Phodrang (Palace of the Profound Meaning of Secret Mantras), the Dzong contains many sacred relics.

4. Textile Museum: Located near National library at Chubachu, it was established in the year 2001. The museum contains Bhutanese textiles, arts, crafts and more importantly the royal collections which includes first version of the Raven crown worn by first and second King of Bhutan, dresses and accessories worn by royal family and the bedding of his holiness Zhabdrung Jigme Dorji.

Towards evening we will drive back to Paro.

The monastery is located 900 m above Paro valley on the face of a rocky cliff. Taktsang is perhaps the most famous monastery in the country. The monastery was named Taktsang after Guru Rimpoche flew there from Kurtoe Singay Dzong (Eastern Bhutan) riding on a tigress to subdue a demon. Gyalse Tenzin Rabgay, the secular head of the country (1680-1694) has begun the construction of the monastery at this site in 1692 and completed in the year 1694. The monastery houses many temples that contain sacred statues of eight manifestations of Guru Rinpoche, Tshepame Yabyum and Bone relic of Pelgi Singay.