Within this short period of time, one can cover two western districts of Bhutan, Paro and Thimphu (capital). This tour is best suitable for those who are deprived of time but needed the glimpse of what Bhutan stands for and its beauty. Scores of historical sites are located within these two districts. 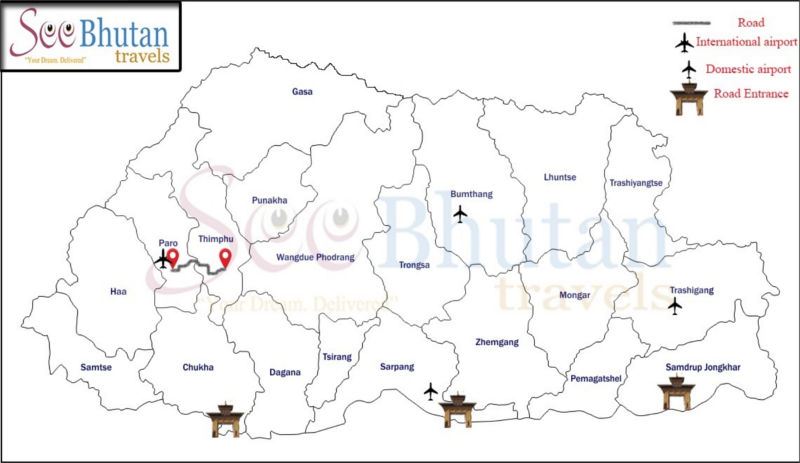 Your flight to Bhutan will be an exhilarating experience with breath taking view of world’s tallest mountains on a clear day. On landing at Paro international airport, representative (guide and driver) from See Bhutan Travels will welcome you at the arrival gate.

After having lunch at some local restaurant, drive towards Thimphu, the capital city of Bhutan. At Thimphu we will visit to national memorial choeten.

After breakfast we will be touring around Thimphu valley and visiting to following sites:

After lunch we will head back to Paro and will visit to following sites at Paro:

1. Paro Ta Dzong (national museum): Located on a spur above Rinpung Dzong, five and a half kilometres’ drive from Tshongdu town, the dzong was built in the mid-17th century as a watchtower overlooking Rinpung Dzong by Lanyongpa Tenzin Drukdra and Chogyal Migyur Tenpa. The circular dzong houses the National Museum of Bhutan

2. Paro Rinpung Dzong: Located on the bank of Pachu River, Paro Dzong, formally known as Rinchen Pung Dzong (shortened to Rinpung Dzong), was built in 1644 under the command of Zhabdrung Ngawang Namgyal. It is one of the most beautiful and historically important dzongs in the country. Today, it houses both district administration and monastic body.

Towards evening we will drive around Paro valley enjoying the spectacular views.

Your short, yet memorable tour to Bhutan will come to an end today. After breakfast, your guide and driver will see you off at Paro international airport.