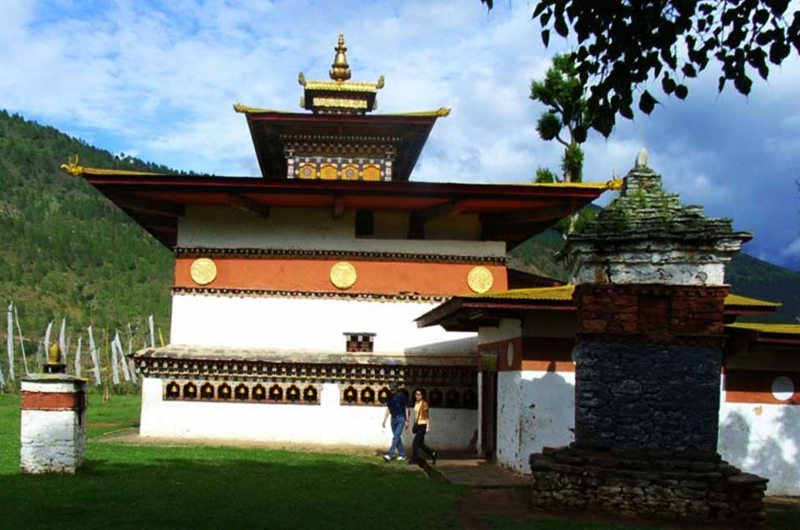 Khemae Lhakhang is located on a hillock in Lobesa under Punakha district about 2 hours drive from Thimphu, the capital city of Bhutan. The temple was built in 1499 by Lam Ngawang Chogyal, the cousin of Lam Drukpa Kuenley, on the spot where the latter subdued a demon who was running away in the form of a dog. Lam Drukpa Kuenley buried the demon and said there was no dog now (khe – dog; mae- no). Hence, the temple came to be known as the “temple of no dog”. Today however it is pronounced as Chimi Lhakhang.

Lam Drukpa Kuenley is also referred to as the Devine madman and sometime as the saint of 5000 women with reference to his physical relation with 5000 women. He had a unique way of spreading Buddhism, by means of active sex lives, wines and poetry. It is believed that Drukpa Kuenley had entered into the nostril of Lasa Jowo (a statue in Tibet) to escape death and he is the only person to escape death.

The temple contains the bow and arrows of Lam Drukpa Kuenley and a phallus to bless the visitor. This temple is also known as the temple of fertility. Couples without offspring visit this temple to get blessed with one. 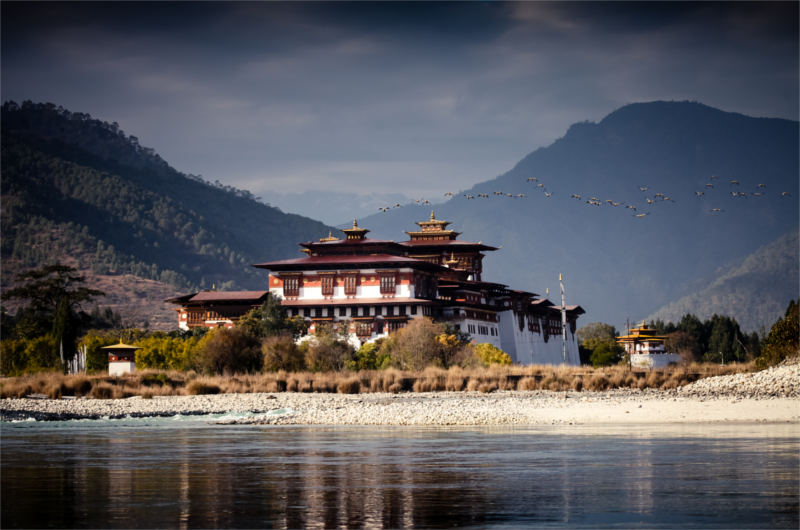 Punakha dzong is located on a stretch of a land where two rivers; Phochu and Mochu meets. The dzong was built by Zhabdrung Ngawang Namgyal in 1937 and named it Pungthang Dewa Chenpai Phodrang, the palace of great bliss. This is the second oldest dzong that Zhabdrung built in Bhutan after Simtokha dzong at Thimphu. Later it became the final retreat palace for Zhabdrung himself.

The first monarch of Bhutan, King Ugyen Wangchuck, was crowned here at Punakha Dzong and it served as the capital of the country until 1955 (shifted to Thimphu). Today it serves as the winter residence of Je Khenpo (the chief of abbot) and the Central Monastic Body.

Punakha dzong has a sacred relic the Rangjung Kharsapani kept in the Machen Temple inside the dzong. This relic was formed from the backbone of great Dharma King named Tsangpa Gyarey, during his funeral in the year 1211 AD in the Ralung state of Tibet. It was brought to Bhutan by Zhabdrung when he fled Tibet to Bhutan due to political dispute in Ralung state. Bhutan and Zhabdrung have to fend off several Tibetan invasions which aimed to retake this precious relic. 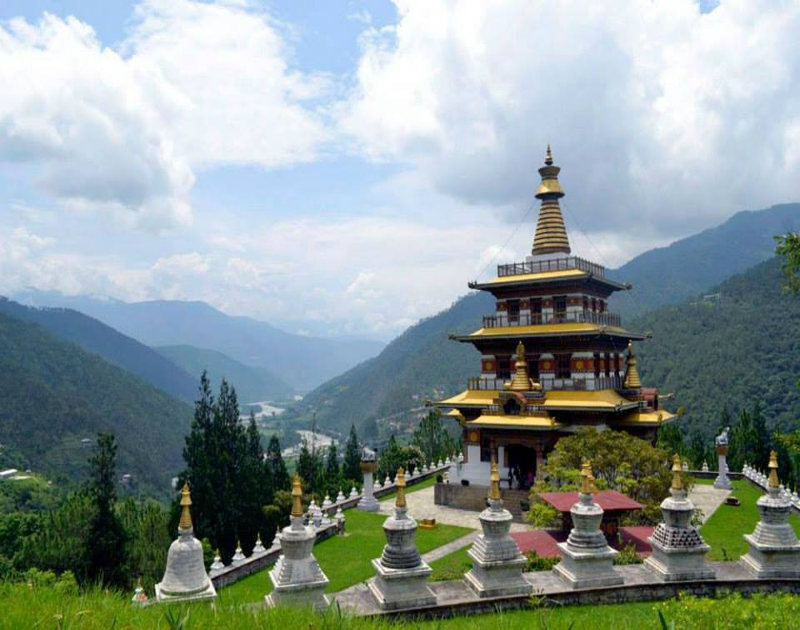 Khamsum Yelley Namgyal Choeten is located in Kabesa Gewog, under Punakha district. After about 7 km drive from Punakha town one will reach the metal suspension bridge from where you need to hike up for about half an hour to reach the stupa.

It was built with the sponsorship of her Majesty the Queen Mother Ashi Tshering Yangdon Wangchuck between 1992 and 1999 under the guidance of Dilgo Khyentse Rinpoche and Lam Sonam Zangpo. The three-storey choeten contains the images of Dorji Phurba on the ground floor, Khrowo Khamsum Namgyal on the first floor, and Khrowo Nampur Gyalwa on the second floor.

Hiking to this stupa will provide you with a great opportunity to enjoy a packed lunch. On the way one will have an opportunity to witness Bhutanese way of farming as the trail will lead you through a vast paddy field.